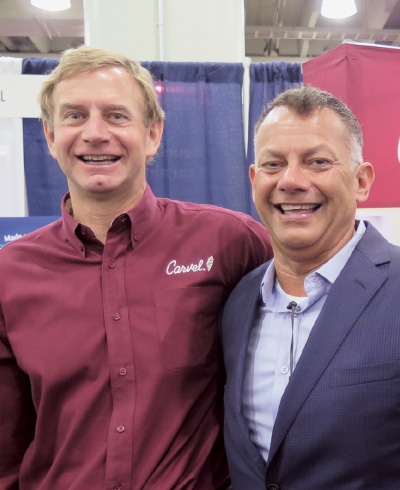 Getting a prospective franchisee to crack open the 401(k) or mortgage their home takes more than a cold call—it takes an emotional connection and cultivating the hopes and dreams of business ownership. In short, it’s not an easy sell.

There are certainly stars in the role, though, people like Peter Ortiz, who lives and breathes franchise sales and development and has a deep career selling hundreds of restaurants for Cici’s Pizza, Quiznos briefly and the handful of franchised restaurants under the umbrella of Focus Brands, including Moe’s Southwest Grill, Schlotzsky’s and snack brands Auntie Anne’s, Carvel and Cinnabon. He said it’s not an easy sale, but there’s no secret to his success.

“I work harder than anyone. I’ll be up early before they get up, I’ll sometimes put in 16 hours,” said Ortiz. “Other people just won’t do that.”

Ortiz, who cut his teeth in the General Motors dealership system, said he sticks to some well-heeled sales basics: Know everyone and reward in kind.

“I’ve been in franchising for 27 years. I market myself to real estate people, operations people, other franchise people in my industry,” said Ortiz. “It sounds simple, but a lot of people won’t do it and would rather just pick the phone up. You go to a show with me, you walk with me just up and down the rows and I’ll know just about everybody there if they’ve been around for more than a couple years.”

“I develop those relationships and develop that rapport with them. I’m not just talking with other sales people. I’m talking about operations. I’m talking about real estate because those are the guys that really know their clients and they talk to me about it. And I ask them, hey, is that someone that you think would be a good candidate for our franchise?

Maybe you can help me out,” said Ortiz. “And they do, and I reward them. I’m a big referral guy when it comes to taking care of those that have taken care of me.”

Knowing everyone means warm leads, and he talks to them all the time too, but they’re never cold calls.

“I make probably 100 calls a week. But once again, whoever I’m calling I know who they are, I know what they do. I even download their pictures to have in front of me to know what they look like,” said Ortiz.

For franchisors looking at the budget and making room for Ortiz, he has some bad news: “You can’t afford me.” So what can franchisors do to get sales talent like Ortiz?

Like Ortiz makes his sales, the network is the place to start. “I think franchisors would be wise to get involved in the industry, whether that’s by joining the IFA or just talking in the industry,” said Jeff Sturgis, VP of franchise sales at McAlister’s, also under the Focus Brands umbrella. “They’re going to find their best talent by asking a lot of questions and finding the best people. More often than not, they’re not on the market looking for jobs.”

Being honest about the goals, the brand and the job ahead is also critical, according to Sturgis.

“I find by being very transparent about the growth goals, the financial opportunity in a reasonable or achievable target is key,” said Sturgis, who also said to share the warts. “Every brand has its warts. If it’s a newer brand, that may be its wart.”

Compensation is a key point for Gary Findley, CEO of Restoration 1 and longtime franchise developer at The Dwyer Group and Curves.

He said he’s been lucky to have brought his sales team from brand to brand, something that might not work in other sales environments, but works great in franchising.

“A good sales guy can move across any brand. It makes no difference what you’re representing,” said Findley. “Franchise sales is franchise sales.”

Some executive search firm execs said it is a tricky time to find developers off the street, or even those looking to move onward and upward from other brands.

The development discipline in general is cyclical, with some noting the Great Recession threw the regular cycle way off course. When the industry is in growth mode, it’s hard to find development people when you need them.

The pipeline is just now filling with younger talent that has had some time to figure things out in this current growth mode, but there’s still a lot of demand. So fundamentals of a brand come into play to find and retain great talent.

One important key is to have a story, whether your brand is emerging or legacy. If the brand lacks a compelling narrative for a franchise development person to tell, it can be tough to attract talent.

Findley says to retain talent, he stays hands off and lets his sales team do what they do best.

“I make sure that they’re paid well, and I hire people that know what they’re doing and leave them alone,” said Findley. “I don’t have them sitting in meetings every week. They don’t make money in meetings, they make money on the phone. I make sure to give them the tools they need to make the sales.”

For a specific compensation number, Findley said he aims for 20 percent of the franchise fee. But as Sturgis says, straight commission is difficult.

“Generally they’ll be heavily compensated on their performance,” said Sturgis. “But not relying purely on commission to survive, that can lead to bad habits when you need a commission.”

While tools, compensation and perks are important, ultimately nothing is better than having a good brand to sell.

“For a franchisor to come after me, and they do, a franchisor is going to have to present me with something that is sellable,” said Ortiz. “Some people think I’m a magician, but I’m really not. You have to have the numbers to back it up.”

A version of this post originally appeared on FranchiseTimes.com.