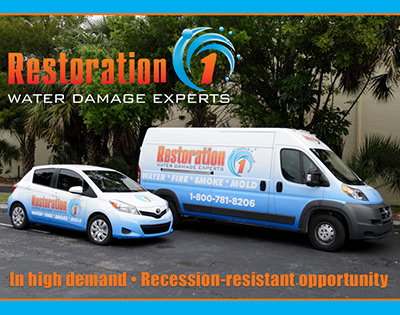 Franchising.com // WACO, Texas – Restoration 1 has officially become one of the fastest-growing restoration franchises in the country – an accomplishment that has earned the business its highest ranking in company history on Entrepreneur magazine’s prestigious annual Franchise 500 list released in January. Restoration 1 rose from #383 in 2016 to #96, underscoring the record number of franchise agreements and system growth that the organization experienced last year.

“We grew our network into a true national brand with the very best franchise owners at breakneck speed, and we’re just getting started,” said Gary Findley, CEO of Restoration 1. “Entrepreneur’s Franchise 500 ranking comes at a pinnacle moment for our organization as we launch into our biggest year ahead. It is the crown jewel for awards in our industry, showcasing the strength of our franchise opportunity at a time when more prospects want to invest in a proven business model and be their own boss.”

This marks the fifth consecutive year for Restoration 1 and the best position to date on the Franchise 500 — one of the most comprehensive franchise rankings in the world, measuring the financial strength and stability, growth rate and system size of franchise organizations.

After Findley took the reins as CEO last year, Restoration 1 awarded over 75 franchise agreements in 2016. And the company projects to add another 100 franchises in 2017 with an additional goal to expand internationally. The big numbers are not new to Findley, a franchise leader known for growing several franchise brands across the country and around the world. Widely recognized for leading the Curves International chain to more than 8,000 locations, Findley said he was drawn to the top job at Restoration 1 for its own incredible possibilities.

“This business has all of the best elements to succeed,” Findley said. “It’s a low entry-level investment with big financial rewards in a recession-resistant industry. You can start this business without an expensive storefront to build out, and we are essentially putting lives back together for our customers when they experience a disaster. Whether it’s water damage, fire damage, smoke damage, or mold remediation, this is incredibly important and rewarding work. And that’s why so many franchise owners want to be a part of this journey.”

Founded in 2008, Restoration 1 is an award-winning franchise that specializes in a wide array of emergency mitigation, restoration, and reconstruction services. An industry innovator, the Texas-based company uses advanced technologies and tools to perform restoration for both residential and commercial properties that have been damaged due to water, smoke, fire, mold, storms and more. There are more than 100 locations throughout the U.S. with plans to expand to more than 500 locations nationwide in the next five years. For more information about franchising with Restoration 1, request a copy of our free Franchise Information Report.